Maybe Homer had miscalculated his dates. Maybe he was throwing 1974 out as ironic and comedic. Certainly, Homer was ignoring what is blatantly obvious to the rest of us: for those who love to rock, 1974 was not that great of a year. Turn on your local classic rock station and you’re likely to hear relatively few cuts from ’74. There’s Golden Earring’s “Radar Love”. The Eagles released “Already Gone”. We got some licks from Bowie and Steve Miller that year. But there just isn’t substantial evidence to back Homer’s claim. Perhaps, though, that is my own bias blinding me to the evidence–for I have a pre-drawn conclusion. My mind has been made up concerning all theories of rock perfection (scientific or not). I am fully convinced that, contrary to the claims of the esteemed Mr. Simpson, rock achieved perfection in 1971. And that perfection is witnessed in Led Zeppelin’s fourth studio album. That album is the reason rock sounds as it does today (you could also argue that the Beatles, Dylan, and several others had some influence… but that isn’t where I want to go today… another time. Patience, dear friend).

One of the unforgettable singles from that album is actually where we turn our attention here.

Great songs aren’t just carriers of good tunes. Great songs have epiphany. Great songs reveal our human condition–often supplying substance to thoughts and feelings that may otherwise be left unexplored in the mundanity of life. They give us the words we didn’t know we had. They give rise to emotions we had scarcely felt. Great songs draw us together in experiencing what it’s like to be a human being.

“Stairway to Heaven” has been called the greatest rock song of all time. I’ve called it that. And with good reason. It does 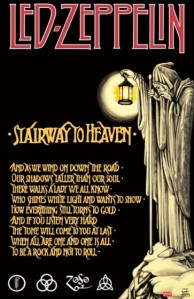 It helps to read this in falsetto-rock voice.

what great songs do… maybe just as well as any other song out there. It’s not a song that simply moves us to a banging of the head during the evening drive home. It is the kind of song which unites humanity in recognizing the fallen-ness of our human condition. That’s a tall task for a rock song, isn’t it? But Stairway nails it as hard as John Bonham nails power triplets.

Let’s look at the words of Stairway…

There’s a lady who’s sure all that glitters is gold
And she’s buying a stairway to heaven.
When she gets there she knows, if the stores are all closed
With a word she can get what she came for.

First verse and we get some deep truth: we feel a sense of entitlement to happiness. It’s true, isn’t it? Zeppelin’s “lady” is sure she will get what she wants. She knows how to reach the point of peace and happiness (“heaven”), and she’s sure that she can provide that happiness for herself… as soon as she purchases the right piece. What a wonderful allegory for our consumptive nature! Don’t you see it, too? We’re all trying to buy our way into a state of happiness and contentment. We buy more stuff. We get gadgets (like the one you’re reading this awesome piece of lyrical enlightenment upon). We grab onto a new fad in diet, time management, home decor… all with a belief that these will be our little “stairways”. BUT, what’s the outcome, dear lady?

“Our thoughts are misgiven” says the song’s protagonist. We’ve missed the meaning of it all. Our stairway still lies upon the “whispering wind”–blown out of our reach. BUT, don’t fear, dear lady… “there are two paths… and time to change the road you’re on,” says Zeppelin.

And how do we find the right road? It’s possible that Zeppelin pulls a “Jesus Juke” within their song (or maybe I’m pulling the Jesus Juke… ANYWAYS…) as they call our attention to a “piper” who leads us down the road to reason and fulfillment. Christians will certainly identify the piper as Jesus, though any person of faith could probably make similar claims about their own belief systems. Jesus juking aside, Zeppelin’s point is clear: contentment is not achieved through our own toil, but in our willingness to follow the one who knows the way (The Piper).

And here’s the beautiful part, The Piper leads us to a place where “all are one and one is all.” There’s a deep, deep thought: in the end of all things, contentment and fulfillment lie in people coming together. Fulfillment is not an individual pursuit–but rather is the result of “all” being “one”. When humanity resists the urge to find individual contentment (to purchase our own “stairways”) and embraces a pursuit of unity with all, we may finally find ourselves following the road of contentment. The Piper walks down that road… and he’s “calling you to join him.”

So there you go… the next time “Stairway” graces your ear hole with its provocative stylings… hear it for what it is: an 8-minute allegory for humankind’s struggle for self-fulfillment… and the deliverance dangled by the Piper.

Hey! Each week we’re going to identify what some the best rock songs of all time tell us about the Divine. Check back each Wednesday as we exegete some more of your favorite tunes. In the meantime, rock. on.