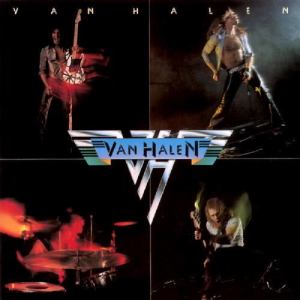 Eddie started melting faces en masse with the release of Van Halen’s eponymously titled album in 1978. The first original work off the album that the band released as a single (the first release was a cover of “You Really Got Me”) was “Runnin’ with the Devil”. It gave us one of Eddie’s more underwhelming solos (I know, sacrilege)–but this may have been given by Eddie out of mercy for our faces since the completely over-whelming “Eruption” comes on the same album. Solo aside, the song endures as one of Van Halen’s radio mainstays.

I live my life like there’s no tomorrow
And all I’ve got I had to steal
Least I don’t need to beg or borrow
Yes, I’m living at a pace that kills

I’ll tell y’all about it
I found the simple life ain’t so simple
When I jumped out on that road
I got no love, no love you’d call real
Ain’t got nobody waiting at home

You know I, I found the simple life, weren’t so simple, no
When I jumped out on that road
Got no love, no love you’d call real
Got nobody waiting at home

Let me ask you: why do we glorify living we know isn’t good? Why does the unsustainable life seem so attractive? Why does living a life that rocks have to be lived at a pace that kills? We’ve all heard about the rock ‘n’ roll lifestyle. We’ve heard of it’s glamor. We admire the pace. We wouldn’t mind tasting it. But are the words of “Runnin’ with the Devil” happy words? Does the narrator sound satisfied?

I love the suggestion this song makes… the suggestion of what it is we are truly longing for. What’s the narrators biggest lament? He is without real love. We long for a real love–not temporary, fleeting, backstage-rock ‘n’ roll love. Rather, love given without asking. Love given without a need to impress. Love granted without buying. I’ll let the reader make his or her own Jesus Juke.

So the next time Mike Anthony’s pounding bass affronts your eardrums and sends shivers up your spine… the next time David Lee Roth’s squeals of lament excites your frontal lobe… in the moments before Eddie Van Halen melts your face… may you entertain some thoughts about what it means to encounter real love. Rock on.