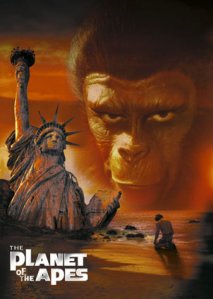 The face of our future overlords? “You maniacs!”

2,000 years from now (probably at the bequest of their intelligent ape overlords) human archeologists will sift through the rubble of our great cities. They will peel back the layers of time,unearthing the ruins of Chicago, New York, Los Angeles… they will rediscover some of the great structures of our society: The United Center, Yankee Stadium, The Coliseum–all immense structures which invited in incredible numbers of people, united them under common imagery and ritual (like singing at the 7th inning or throwing hats onto the ice), and let the people bear witness together to the great feats of the heroes of their day. They will conclude that these structures were surely buildings of religious significance. And what took place within them was religion.

Will they lead their ape overlords astray in assuming center ice and home plate were our altars? Joel Quenneville and Joe Girardi were our priests? Would they actually be wrong in their conclusions?

Sports have become the organizing factor in life for many of us–which will unnerve some.

But perhaps taken in proper perspective, sports could actually lead us into encounters with the Divine. In 1 Peter 2, the Apostle Peter (the dude who walked on water) suggested that temples are no longer defined by bricks made of stone or mud. Instead, temples are built in the gathering of people. You and I (and even our future ape overlords, I suppose) are the bricks forming the building through which the Divine is encountered. We, together, are the space of God’s presence.

So, no, Yankee Stadium or the United Center are NOT our temples (nor is St Patrick’s or the Crystal Cathedral). But the gathering taking place there-in could be a temple–if that gathering becomes a means to encountering the Divine. So the next time you’re in the midst of a gaggle of soccer parents or sharing a basket of chili cheese fries while watching the game, may you ponder how that moment might become a temple moment. How can the presence of the Divine be felt and shared with the people gathered? May that moment become a moment through which you–the acting priest of the most high (Peter calls you that, too!)–identify and make known the presence of the Divine.

… and maybe, with enough temple moments, we’ll be saved from societal destruction at the hands of the apes.